700TVL
720TVL
1000TVL=Even if you have 1000 TVL image sensor in the camera, you can’t cram more than 720 TV Lines down the analogue cable and into your DVR. Companies selling 1000 TVL cameras are trying to charge you for quality you can’t record. (sometimes 1000TVL cameras are actually mislabeled 700 TVL or 720P cameras) 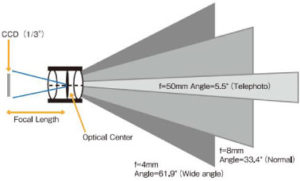 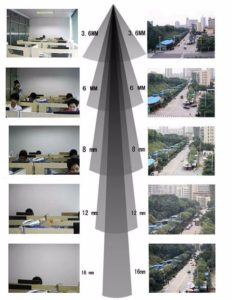 Here is a very common question. How many TVL should the camera have to best use the resolution of my DVR? This is one of the most misunderstood relationships in CCTV. The resolution that the DVR records in refers to the SIZE of the image being recorded. So CIF resolution (360×240) and 4CIF resolution (704×480) refer to how large the image actually is. 4CIF is an image that is 4 times larger than CIF.

TVL refers to the Horizontal lines of resolution the camera can display in. This will determine the amount of detail you may see within a certain size image (CIF, 2CIF, 4CIF). When selecting the right camera, keep in mind that the resolution being recorded and the resolution being displayed are usually different. In most cases a DVR will display live video at 4CIF (704×480) or D1 (720×480) resolution, but be recording in a lower resolution like CIF (360×240). Though a live 4CIF display of video will benefit from a 520TVL camera, the recorded image in CIF will not see the difference between a 520TVL camera and a 420TVL camera. So in essence you will only benefit from the live view, not the recorded image.

Television Lines is a specification of an analogue camera and monitor’s horizontal resolution power. It can be measured subjectively with a standard EIA-1956 resolution test chart, example depicted below or it can be calculated to reveal a theoretical maximum. The value of the TV Lines is defined as the maximum number of alternating white and black vertical lines that can be successfully resolved, by convention, in an area of the screen equal to the picture height (TVL/PH).

Due to the different ways in which CCTV is transmitted, digitally or analogue, the subject of CCTV resolution can become confusing when attempting to make a comparison. TV Lines in an analogue setting is not the same as digital pixels per width. For that reason I have produced this brief to provide you with information concerning:

1. The limits of analogue resolution.
2. Address a tactic being used by CCTV manufacturers and retailers to artificially increase their system’s specifications by mis-quoting TV Line values.
3. The pointless arrangement of a system consisting high resolution cameras connected to a low resolution Digital Video Recorder.
4. Make it clear that the advances in analogue CCTV technology today, such as 960H are not exactly compatible with standard analogue systems. 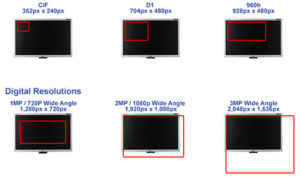 (TVL) is a specification of an analog camera’s or monitors’s horizontal resolution power. It is alternatively known as Lines of Horizontal Resolution (LoHR) or lines of resolution. The TVL is one of the most important resolution measures in a video system. The TVL can be measured with the standard EIA-1956 resolution chart.[2]

TVL is defined as the maximum number of alternating light and dark vertical lines that can be resolved per picture height.[3] A resolution of 400 TVL means that 200 distinct dark vertical lines and 200 distinct white vertical lines can be counted over a horizontal span equal to the height of the picture. For example, on 4 by 3 inches (10.2 cm × 7.6 cm) monitor with 400 TVL, 200 vertical dark lines can be counted over 3 inches (7.6 cm) width on monitor (Note that the 3 inches (7.6 cm) of monitor height is used rather than the 4 inches (10 cm) of whole monitor width).

TVL is an inherent quality of a camera or monitor and should not be confused with the horizontal scanning lines of broadcast television systems, which e.g. for a PAL system are 625 lines, and for the NTSC system 525 lines.

The “p” stands for “progressive scan”; an”i” stands for “interlaced scan”. Progressive scan is the type of video a computer display uses, repainting the whole screen each frame. Interlaced scan is what an analog TV used, where it draws every other line of the video, then the lines it skipped in the previous pass (works fine on a CRT, but leads to visible “combing” on digital displays).

720p and 1080p are ATSC standard HD resolutions generall with a 1:1 pixel aspect ratio and a 16:9 display aspect ratio. 480i is generally considered standard NTSC analog TV, and 480p the de-interlaced version of the same. The Digital Versatile Disc (DVD) specified the data be encoded at 720 * 480 pixels interlaced (for NTSC video), but the pixel aspect ratio could be varied as “anamorphic” video (the term comes from cinematography, it refers to using a special lens to distort a wide image on a narrower film, and then using a special lens on playback to stretch the image back; in this case, it’s scaling by the DVD player). Most of the other resolutions are simply mimicking the pattern used for the standard sizes. 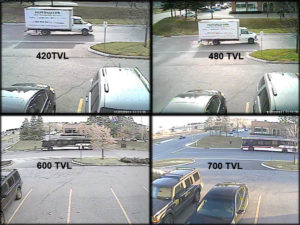